Seeing Brogan by chance is slim
He dashes 'round on a whim
his pot of gold
would yield riches untold
if only you could catch him.

The latest Minifolk art piece is Brogan the Leprechaun, complete with his pot of gold and rainbow. He is available now on Etsy.
Posted by becca.elpy at 10:00 AM 1 comment:

That Thing I Do 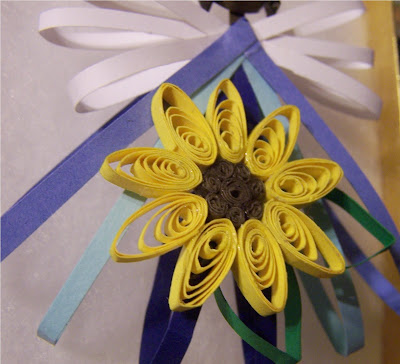 So I'd mentioned in the 'Why' of the 5 W's series that I have always loved paper-crafting. But there are so many forms of paper-crafting...how did I come to quill?

I was in Etsy chat back in the day (circa 2007), talking about the angel ornaments I was selling at the moment. One of the fellow chatters mentioned they were very unique...were they quilled? I didn't know what quilling was. She linked me to the Wikipedia entry. Quilling wasn't exactly what I was doing, but it was similar and I was intrigued.

I stopped making the angel ornaments a short time after that. They just didn't get the response I was hoping for. I had incorporated quilling into the design of a few of them. But put it all aside until last summer, when I needed to make some people for the Etsy video and though...I'll try making them out of paper.

That's my story. I think it shows how the art/craft/design community can influence each other, expand the ways we do our work. Who knows? Maybe the ornaments will make a comeback one day.
Posted by becca.elpy at 9:52 PM No comments: